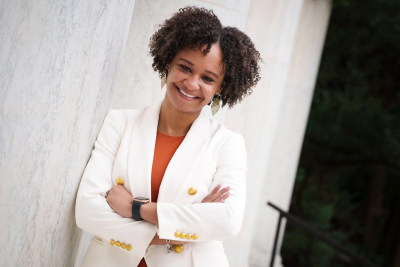 A Duke alum, Assistant Professor Tracie Canada joined the Department of Cultural Anthropology this fall. Her research and teaching interests lie in race, sport, kinship and the performing body, and her in-progress book manuscript, “Tackling the Everyday: Race, Family and Nation in Big-Time College Football,” describes and theorizes the lived experiences of Black college football players.

We spoke with Canada about her work, returning to Duke, how sports shape everyday lives and her hopes for her students.

How do you describe your work as a cultural anthropologist?

I’m somebody who thinks about our social worlds and about the things going on around us. I do that through ethnography, by spending immersive time with people in their own spaces to learn how they make meaning of what's going on and how they theorize their own experiences. My work is focused in the United States.

For me, specifically, that means considering the lives of Black college football players. I spend time with them and their families, while they're practicing, at games and just being college students. I also ask their coaches questions. I’m interested in learning who populates their social world, how the players themselves make sense of what's going on around them, and how they create relationships in the systems they're a part of.

In your writing, you argue that Black college football players successfully move through their everyday lives by reimagining certain kinship relationships and relying on various geographies of care. Can you explain more about that?

I’m interested in the ways this group of college-aged men interact with one another, their families, their coaches, their professors — all the people who populate their social worlds.

Something I found in my work is that there are different forms of care that come with various relationships and forms of family. Black college football players form a family amongst themselves that is quite different from the “football family” rhetoric that's coming from the top down, from administrators and coaches who are branding themselves as a family.

The NFL does it. College football teams do it, and lower level teams do it, too. There's this strategic narrative that, “We are all a family. We are all in this together.”

What I'm writing about now is that Black players recognize this rhetoric and they're on board with it to an extent, but they also recognize it’s not everything they want and it's not always helpful. They have different experiences because of how they're racialized in the world, and they rely on different relationships with one another.

Players get a certain type of care from their biological families, the families they leave behind. When they come to college, they get a different type of care from this football family that is actually very institutional and, I would argue, exploitative, because this family is concerned with their labor on a football field. There are certain kinds of care that are invested in these players by different people, by different groups, by different forms of family, based on what is needed at the time.

I argue in my work that players are very aware of what's going on around them. They don’t just belong to systems where they're unknowingly being exploited, or used or even loved on. It's just that they navigate it in very particular ways. This then leads me to question what kind of care comes up between men, especially Black men of college age.

These are all ideas I'm thinking about, but the way that it came up was that I recognized there were different forms of family and different forms of care that are mapped onto them. So, how are Black players centered in that and how do they relate to all of those different systems while they’re going to class, hanging out, playing games on the weekend and meeting their families? These are things that all college students are dealing with, but on top of that, these young men are playing a violent sport that takes up a lot of their time.

Some of these guys love the sport. Some of them don't. Some of them are recognizing all the changes that are happening in it and are trying to find their place in it. I'm invested in the ways they come together in the midst of all of this.

You earned your undergraduate degree at Duke. How are your ideas about cultural anthropology different now than when you were a student?

I graduated from Duke in 2013, so I'm coming back as a faculty member after 10 years of being away. It's really interesting for me to be back here doing the work that I'm doing, which is research that I started when I was an undergrad. I started thinking about what it meant to be a young Black man in college who played football when I was a sophomore here. The same faculty who helped me develop these ideas are my colleagues now.

Since my time as a student, I’m much more reflective about what it actually means to be a cultural anthropologist. Anthropology has its roots in racism, imperialism and colonialism, and these are issues that continue to affect the discipline. Also, as a Black anthropologist, I belong to an intellectual genealogy of scholars whose contributions have been excluded and discounted. I’m constantly negotiating my position in this complicated past and present. I think it’s important to be honest about this history with students, but to also highlight the remarkable potential of anthropology when it’s at its best.

How important is it for you to encourage students of color to pursue a career path as a cultural anthropologist?

That's a tough question because of what I’ve already mentioned. The only reason I’m a cultural anthropologist is because of other Black anthropologists who encouraged me and showed me that it's possible to do. The main person who did that for me was Lee Baker, a professor in this department. He was my mentor when I was an undergrad and encouraged me to apply for the Mellon Mays Undergraduate Fellowship Program (MMUF), which is a program I participated in for historically marginalized students.

Cultural anthropologists of color are definitely gaining in numbers, but it is a predominantly and historically white field. And so I think it was great early on in my undergrad career to have somebody like Lee say, “This is possible, if this is something you want to do.” He and MMUF have taught me to model that behavior for the generations of students coming up behind me.

I've gone through the ranks, from undergrad to grad school to a postdoc and now faculty positions. Through it all, I purposely sought out other students of color, specifically Black students, to reinforce that I'm not alone in this. We’ve created communities in these spaces and we're providing examples for anthropologists of color interested in entering the discipline.