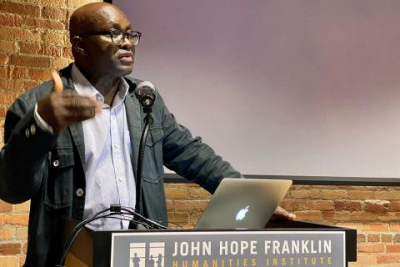 Global experts gathered at Duke University to examine today’s border policies and the movement of migrants between Africa and Europe.

Although borders are often considered fixed and rigid boundaries, the definitions of who can cross and who cannot are constantly changing, Duke professor Charlie Piot told attendees at the “Challenging Borders” conference held on Nov. 18 at the John Hope Franklin Humanities Institute.

“Many borders are decided in places that aren’t at the edges of nations or represented by a fence,” said Piot, a professor of cultural anthropology and African and African American studies and a leading researcher in the economy and history of West Africa.

During the event, Piot presented his research that looks at how interviews with embassy officials in Togo influence acceptance into the United States visa lottery system.

During the forum, ten speakers discussed their scholarly work regarding migration between African countries and Europe. This is the third year Duke has hosted the conference.

One of the speakers, Amade M’charek, an anthropology professor at the University of Amsterdam, told the audience about her research that centers around the word “harraga” – an Arabic word that means “those who burn.” The word reflects the activities of undocumented migrants who challenge border policy and make the risky journey from Africa to Europe through unofficial channels.

“Those who engage in harraga burn borders to enter Europe,” M’charek said. “They do not burn bridges to the people and the places they depart from. To these, they keep all kinds of links.”

Another scholar at the conference described the lives of return migrants, or those who decide to return to their home countries. Aissatou Mbodj is an anthropology research fellow at the French National Center for Scientific Research in Paris, and she’s catalogued the experiences of many migrants who return to Africa after immigrating to Europe. She described the local pressure these migrants face when others in their home country evaluate their journey as a success or a failure.

“The issue is not how someone comes back, but what someone has achieved,” Mbodj said.

Technology at the Border

The conference’s keynote speaker, Achille Mbembe (pictured at top right), gave a lecture centered around questions of how the earth will be divided among populations in the future. He also presented his work that looks at how modern technology allows officials to collect biometric information on individuals and sort the movement of people at borders.

“One of the crucial developments in the last few decades has been the development of border technologies,” said Mbembe, a philosophy scholar at the University of the Witwatersrand in Johannesburg, South Africa. “To the extent that technology has become not just the infrastructure for this new partitioning of the world, but this new redistribution of the earth, this new attempt at defining to whom the earth belongs.”

In the past, borders have formed around the movements of people caused by capitalism and colonialism, among other reasons, Mbembe said. The main factors that influence migration today, Mbembe listed, include technology, biopolitics – issues where human biology and politics overlap – and environmental crises.

For more information about the event, contact Meredith Watkins (meredith.watkins363@duke.edu).