Shaking Off Outmoded Ideas On Race 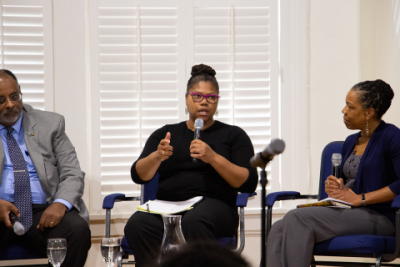 The racial divisions that so permeate American society are not rooted in biology, a group of scholars agreed Wednesday at a public forum on race.

The event, “RACE: Past, Present and Future,” featured scholars from Duke and N.C. A&T State University along with Kenyan paleoanthropologist and conservationist Richard Leakey, known for fossil discoveries that shed light on early human evolution.

“It is uniquely American to be so preoccupied with a misnomer,” Leakey added. “White and black aren’t races. Yet we fight wars and enslave people on this basis. You must stop talking about race and color in the same breath if we want to improve the lot of our planet.”

Joseph Graves, an evolutionary biologist at N.C. A&T and UNC-Greensboro, agreed that humanity is not divided into biologically defined races. Instead, the human genome is remarkably similar for people around the world.

“Race as we thought of it in the 17th and 18th centuries is wrong,” he said. “Yet in high school and college texts, race is still taught as if it were real.”
-- Joseph Graves

And yet the notion of biological races persists.

“Race as we thought of it in the 17th and 18th centuries is wrong,” he said. “Yet in high school and college texts, race is still taught as if it were real.”

“That message has never gotten to the American public,” said Graves, who noted he is the first African-American to hold a tenured position in the field of evolutionary biology.

Students often struggle with that idea, she said, asking questions such as, “How can it be real and yet not real? How can it be a social construct – and yet I’m more likely to be stopped by police?”

Several panelists said the popularity of genetic testing services such as Ancestry.com has further clouded many people’s thinking about race and genetics.

Health is another arena that deserves careful attention, Graves added. Some diseases are clearly more common among African-Americans, but that reflects environment more than biology, he said.

“The important question for our society is, ‘How does racism get under the skin genomically?’” Graves said. “A lot of that has to do with epigenetic causes, such as chronic stress and deprivation.”