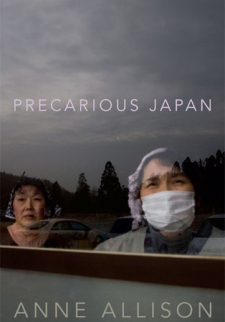 In an era of irregular labor, nagging recession, nuclear contamination, and a shrinking population, Japan is facing precarious times. How the Japanese experience insecurity in their daily and social lives is the subject of Precarious Japan. Tacking between the structural conditions of socioeconomic life and the ways people are making do, or not, cultural anthropology professor Allison chronicles the loss of home affecting many Japanese, not only in the literal sense but also in the figurative sense of not belonging.

In an appearance on "The State of Things," Allison said after three decades of a stagnant economy, the Japanese have radically altered the way they relate to one another and their notions of home, family and togetherness. She also discusses her book on the Duke University Press blog.