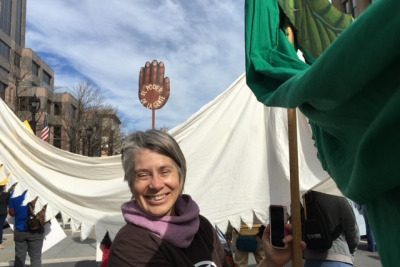 Diane Michele was born in Oxford, Ohio to Donald N. and Lois E. (Genn) Nelson. She was a bookworm, horse lover, poet, campfire girl, director of backyard plays, and outstanding soprano. She performed in the high school orchestra and show choir, starred as Daisy Mae in Li’l Abner, and was a member of the debate team and honor society.

In 1980, Diane began her lifelong relationship with Latin America as an AFS exchange student in Merida, Mexico. As a National Merit Scholar at Wellesley, she discovered her passion for cultural anthropology and met her mentor, Beatriz Manz, who inspired the research on Guatemala that Diane would pursue for over four decades.

Diane began researching conditions in post-civil war Guatemala in 1985, driven by her commitment to oppose militarization and US interference in Guatemala and to bear witness to the struggles of the Guatemalan people.

Amidst her trips between Boston and Guatemala, Diane met Mark Driscoll, then a Boston musician and activist. Mark and Diane began the greatest love of their lives and a partnership that would last for 35 years.

As a Ph.D. student in anthropology at Stanford, she continued her focus on indigenous Guatemalan life-worlds and politics. Diane joined the anthropology faculty at Lewis and Clark in 1996. A life- changing inspiration to many students, she was named Oregon College Teacher of the Year in 1998. The following year, her brilliant first ethnography, A Finger in the Wound, was published. Diane moved to Duke in 2001; built a “glo-cal” community of activists, scholars, and students; and published many articles and two more ground-breaking books on Guatemala: Reckoning (2009) and Who Counts? (2015).

Always eclectic and multi-talented, Diane practiced yoga and earned a black belt in Tae Kwon Do. A longtime social justice activist in many movements, Diane fought for reproductive rights, supported Occupy, was arrested twice on Moral Mondays, and led the Red Rebels as part of Extinction Rebellion (XR).

Passionate about the environment, Diane loved keeping bees and playing outdoors, especially with her nephews, Ben and Lucas.

Diane received the cancer diagnosis with the exceptional grace and selflessness she brought to all of life. She gave us the gift of her beautiful smile until the end.

Who Counts? The Mathematics of Death and Life after Genocide (2015)

A Finger in the Wound: Body Politics in Quincentennial Guatemala (1999)