Art, Music and Defense of the Territory in the Amazon: The Protagonism of Indigenous Women

November 4, 4:00pm
This panel discussion is online: check https://music.duke.edu for the link as the date approaches.

Vandria Borari and Neila Borari, artists and activists from Borari territory in Alter do Chão, Baixo Tapajós, and members of the Indigenous women's collective As Karuana, will address the relationship between Indigenous art, spirituality, collectivity and ancestrality. They will talk about the role of art and music produced by Indigenous women in the region in defending the territory in the context of increasing land speculation, logging, mining and monoculture farming. Indigenous art comes from Mother Earth. Without the forest there is no art.

Neila Borari is a cultural producer, independent researcher, art educator, composer, screenwriter and artisan who focuses on the Indigenous culture of her people and the peoples of the Tapajós. She is a graduate from the Federal University of Western Pará - UFOPA - and develops socio-environmental and cultural projects in the region. Neila has worked as a composer in the largest folkloric event in Western Pará (Festa do Sairé de Alter do Chão). In 2019, she participated in the production of an international music video recorded in the Amazon to be released in Germany by singer Be Ignacio. She is one of the creators and executive producers of MUTAK (Tapajos Indigenous Art Exhibition), the executive producer of the music video "Borari" / As Karuana, and music producer of the album ''Vozes e Sons do Tapajós''.

"As Karuana," is a group of Indigenous women who use music and art to fight for the protection of the rivers and forests.

*Event in Portuguese with simultaneous translation to English.

This online discussion is presented by Duke Music, in association with the Amazon Humanities Lab at Duke
University and the Department of Cultural Anthropology.

END_OF_DOCUMENT_TOKEN_TO_BE_REPLACED 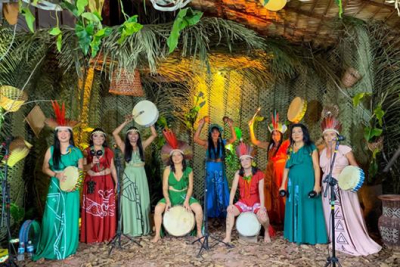