Indigenous Music from Brazil and the Struggle for Rights: Contemporary Alliances and Transformations

This lecture presents some aspects of the Indigenous people's music from different parts of Brazil through the experience of Mi Mawai, a transmedia collective born out of an affective alliance with the Huni Kuin people from the Amazon. The talk will focus on Indigenous art works in the 21st century, especially music, in the context of contemporary Brazil's Indigenous struggle.

Nana Orlandi is the idealizer and artistic director of Mi Mawai: a transmedia music label that since 2017 works as a platform for meetings and alliances between indigenous and non-indigenous artists through projects that have music as their central axis. She graduated in Law, UFRJ (2010) and in Geography, Puc-Rio (2012), and has over 15 years of experience in the independent music chain. As a member of the etnohaus collective, she acted as percussionist, producer and articulator in several collaborative projects. She co-directed the films "Niwe vai ~ caminhos do vento" and "Música é arma de luta" that deal with Contemporary Indigenous Music in the context of the struggle for rights.

Idjahure Kadiwel is an Indigenous anthropologist, editor, translator and poet of the Terena and Kadiwéu peoples. He works and researches Indigenous art, ethnomedia and ethnology, having edited books and catalogues, and made podcasts and films aimed at disseminating the Indigenous social movement and arts in Brazil. He holds a master's degree in Social Anthropology at the Museu Nacional/UFRJ and is a doctoral student at USP.

Lucas Canavarro is a transdisciplinary artist who transitions between image, text, music, performance and its frictions with the audiovisual language. He has a master's degree in Contemporary Artistic Processes at the State University of Rio de Janeiro. His work is developed under different collectivities, such as Mi Mawai, a platform for alliances between indigenous and non-indigenous artists, and Miúda, a cluster for continued research in contemporary arts. Lucas has codirected the short films NIWE BAI ~ windpaths and Music if the Weapon of Warriors (2021) and worked in 2021 as a visiting researcher at the Federal University of Bahia.

Presented by the Departments of Music & Cultural Anthropology, and Amazon Humanities Lab at Duke University.

END_OF_DOCUMENT_TOKEN_TO_BE_REPLACED 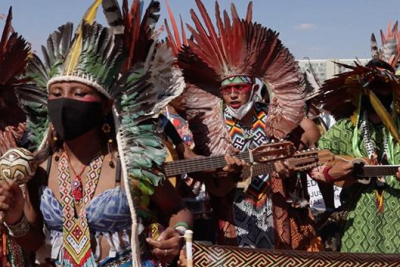