The Right to Housing: The Fight for Housing

Readings and registration at http://duke.is/NySRzT!

A home is fundamental to the human condition. And yet many people-over time and across the world today-struggle to find, or keep, this most basic necessity. What does it mean to assert a right to safe, sustainable, affordable housing? And what are the political, ethical, and existential issues raised by its lack or unattainability?

This 2-part event (9/24 & 10/1) will be moderated by Brian Goldstone, a journalist and anthropologist currently writing a book on gentrification, housing insecurity, & the rise of the working homeless, and Anne Allison, Duke anthropologist who has worked on precarity, lonely death, & homeless dead in Japan.

Among the most striking political developments in recent years is the emergence of a powerful grassroots tenant rights movement. Denouncing the profiteering, predatory speculation, and engineered segregation that has deprived an unprecedented number of people-the majority of them working-class black and brown Americans-of a roof over their heads, tenants and their allies are organizing for structural transformation: the guarantee of a safe, permanently affordable home for everyone living in the United States. The movement is premised on human shelter as a basic right. The session will feature: Samuel Stein (Community Service Society of New York), Tara Raghuveer (KC Tenants/People's Action), Tracy Rosenthal (LA Tenants Union), and Hannah Black (artist and writer).

END_OF_DOCUMENT_TOKEN_TO_BE_REPLACED 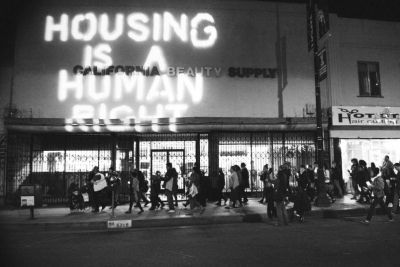