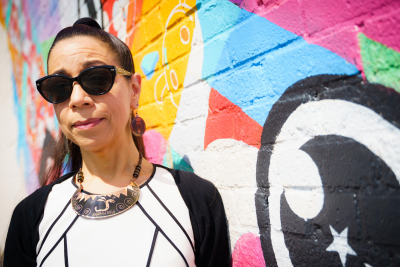 Working with colleagues across multiple disciplines excites and inspires Courtney Lewis to think about future classes she’d like to create.  (John West/Trinity Communications)

Courtney Lewis wants to teach a class about “alternative economies” even though she doesn’t really like the term.

“I don't like the idea of making a juxtaposition against capitalism,” she says. “But… because we live in this particular American society, we’re made to feel like capitalism is our only choice.

Lewis, who joins the Department of Cultural Anthropology this fall, is a citizen of the Cherokee Nation in Oklahoma. In graduate school at the University of North Carolina – Chapel Hill, she was drawn to working with the Eastern Band of Cherokee Indians (EBCI) in western North Carolina because of their track record in utilizing business ownership to enrich the community.

Lewis was interested in the unique opportunities and challenges facing EBCI’s small business entrepreneurs, and hoped her research would uncover ways to make them even more successful. “My goal in my academic career isn’t to model people, but to work with them to bolster their and other Native Nations’ economic systems. The EBCI has a long history of small business ownership, societally and culturally.”

After earning her Ph.D. in 2012, she turned her dissertation research into her first book, “Sovereign Entrepreneurs: Cherokee Small-Business Owners and the Making of Economic Sovereignty,” which won the 2020 Mooney Award from the Southern Anthropological Society.

The COVID-19 pandemic created even more disruptions for the EBCI entrepreneurs, but Lewis was impressed, although not surprised, by how resilient they were.

“The Eastern Band of Cherokee Indians has weathered many crises, both at a government corporation level but especially at a small-business ownership level. This isn't the first pandemic they've been through. Most recently, they went through the 1918 pandemic, right? We, as Cherokee people, have been through many, many crises. And so, in some ways, they were prepared to hunker down and get through another challenging time.”

Growing out of her observation of EBCI restaurant owners during the Great Recession and COVID-19 pandemic, Lewis’ current research focuses on Indigenous food pathways.

“One of the riskiest businesses you can get into is anything in the food industry,” she said. “As I was considering what to do for my second project, the food sovereignty movement was really accelerating worldwide.”

The movement, which seeks community control over all aspects of food production, from farming to distribution to table, is gaining mainstream traction, but Lewis recognized food sovereignty as a system many Native Americans were already utilizing.

“Businesses that specifically focus on indigenous foods face challenges on multiple levels,” she said. “They need to figure out things like, ‘How do I actually source these foods? Who am I buying from? What if I can't get the amount of food I need to actually feed people?’ If they have to start a farm, where are they getting the seeds?”

Despite the challenges, Lewis observed that EBCI restaurants that were deeply embedded in the community and already sourced their food locally weathered the COVID-19 pandemic as well, or better, than restaurants that had to source their food through the global supply chain.

Explorations of identity and sovereignty will shape Lewis’ classes at Duke. This fall, she’ll be teaching the undergraduate course American Indian Nations Today, which she describes as “my American Indians 101 class.”

“It's perfect for students who don't have a formal background in American Indian studies, but will also contain a lot of material that even seasoned students are going to find surprising,” she said. “We’ll talk about activism, economics, research methods, the arts and even new television shows.”

Lewis recommends “Reservation Dogs” by Sterlin Harjo and Taika Waititi, which she says is “phenomenal” and “top to bottom American Indian: writers, directors and actors,” and the comedy “Rutherford Falls.”

The prospect of working with colleagues across disciplines, in economics, innovation and entrepreneurship, art and history is one reason Lewis is excited about being at Duke. It’s inspiring her to think about future classes she’d like to create (like the one focused on alternative economies).

“I’d like to teach a class about the labor rights movement in the U.S. South,” she said. “It's really fascinating and oddly similar to teaching American Indian studies because in both of them you have a history that's been hidden, that's been ignored until fairly recently, and both are threatened with being banned again. So many people don’t know about this history’s impact on our lives today, but I have a passion for it.”

“I hope my students get a little bit of that passion, too.”